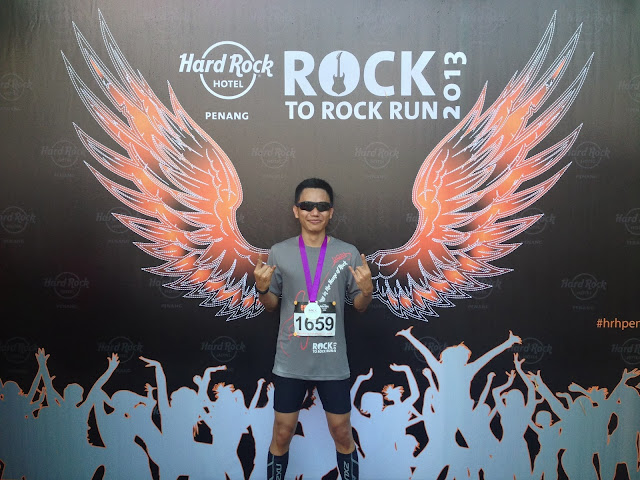 Running In The Name Of Rock!

It was a good 10.2KM run along Batu Ferringhi yesterday. As Batu Ferringhi is located at the beach area in Penang, this running event allows participants to enjoy the scenic beach and sea view in the area. Signed-up for this run alone this round.

Race Entry Pack Collection
As per arrangement by the organisor, outstation participants were allowed to collect their race pack the day before the race too. I managed to collect mine at Hard Rock Hotel office. The staffs and the security officers were very helpful. The running tee design was awesome. Still got my own size as selected earlier during registration even for late-collection. Comfortable material by Brooks. Kudos to Hard Rock Hotel Penang! 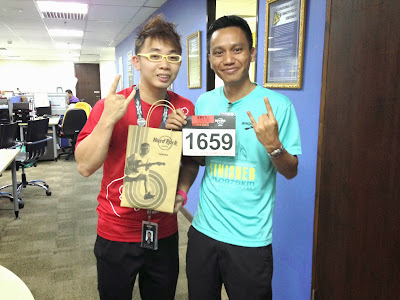 Reached Hard Rock Hotel at 6am. Parking area was available but at a first-come-first-serve basis. Luckily found parking 300 metres away from Hard Rock Hotel.

Head straight for registration and was given a yellow band. On-site runners registration was mentioned in the race guide.

The 10.2km category was flagged at 7am. It was a straight forward run without any turns until KM4 at the round-about. Distance markers were seen at every 2KM. Water station and medical were only available at KM5 after doing a U-turn at the checkpoint. Luckily I was wearing my water bottle belt for own hydration. Received the 2nd wrist band in red at KM5 checkpoint too. 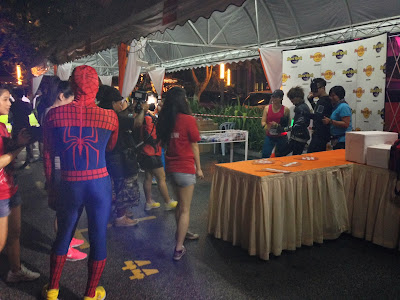 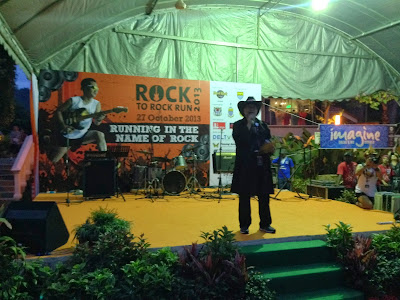 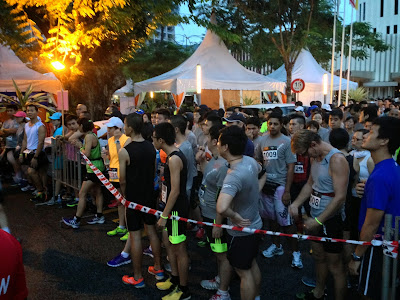 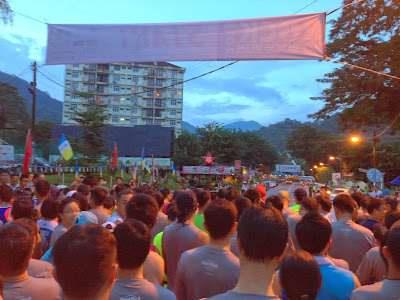 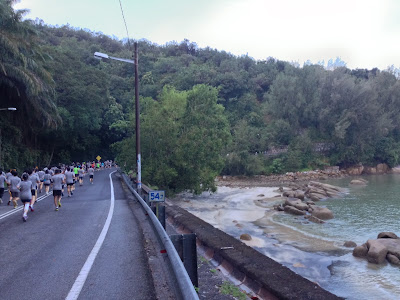 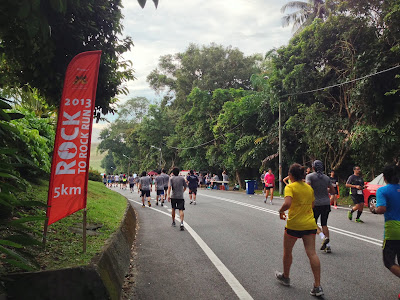 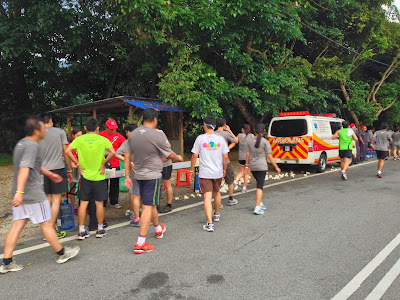 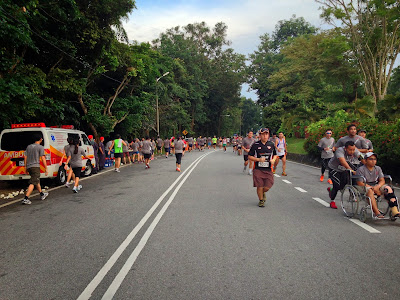 Completed the run back at Hard Rock Hotel Penang at 01:16 minutes. Hope to see some finishers photos of the event soon. Collected my finisher medal, certificate and a lucky draw number at the finishing line. 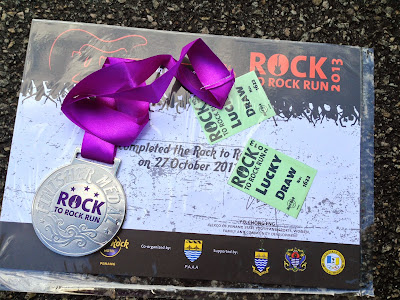 Tracked my run with Nike+ Running app. Below route map for 10K category. 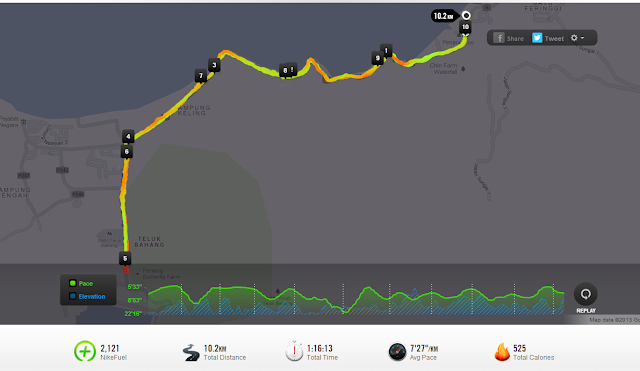 Did a short stroll at the event area while waiting for the lucky draw sessions. Booths are as sponsors, partners and charity. There was a Zumba Dance and great live-band performances by Ray & Jazzjatz and Deviate too. Love the event photo backdrop. The wings element design is so cool! 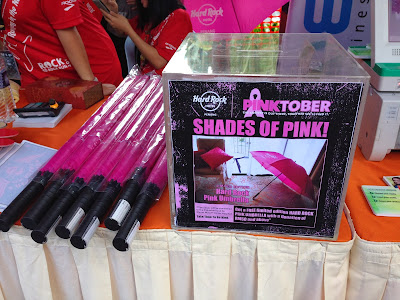 The running route was fine but not until KM7. Buses and other motorist were using the same road. Had to volume-down my music and ran closely to the side of the road to avoid incoming vehicles from front and back.

Was surprised knowing to have only 1 water station for a 10KM distance run at this event. Lack of medical team along the route too. Saw a lady runner had to walk 1KM towards the checkpoint with a cramp. 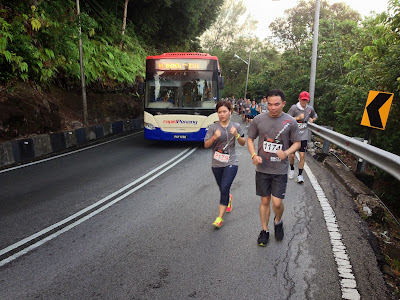 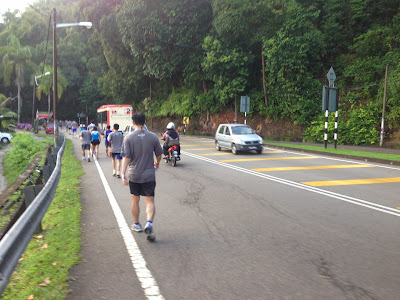 Summary: Good job to Hard Rock Hotel Penang and partners! I will definitely come-back next year. Just wish I had won any of your lucky draw prizes. 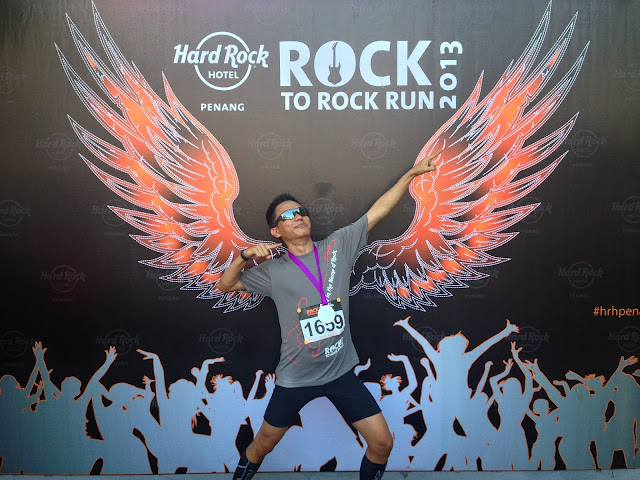 Popular posts from this blog

December 26, 2012
During last festive Christmas holiday, while people were busy hunting for their christmas presents for family and friends, I was busy hunting for a new pair of glasses. My existing glasses frame broke after 4 years. I started my hunt on the same day of my movie screening 'Here Comes The Boom' at One Utama, Damansara Utama. With an expectation in getting a new pair of frame, which would fit my old lenses, my eyes got attention on a pair of frame --- the Oakley Crosslink. Did a quick 'google' on this glasses on my mobile. Checked with the store attendant and tried if it would suit me. The rubber temple grip was good and comfortable, even suitable when you running. The Oakley Crosslink comes in various colors with 2 different sets of temples. I was interested in getting either the matte black + blue or the matte white + maroon at size 53. You may want to consider the below before purchasing: Price (pricing may be different at
18 comments
Read more

March 31, 2014
Oakley Crosslink Ear Sock Replacement (Replica Edition) The Oakley Crosslink is a good and well-design spectacles. Unfortunately looking to replace the 'wear-and-tear' ear sock would be challenging. In Kuala Lumpur, you may need to walk and place your order at most Oakley authorised dealer shops and wait for few days or weeks depending on the stock availability which is very troublesome. I decided to get a replica version of the earsock instead after few months of searching. Do read my review of this set of glasses from my earlier post. http://xeon204.blogspot.com/2012/12/oakley-crosslink-unboxing.html User have high-interest to get their hands on these ear sock. Some of them may need it to replace the current original ear sock due to tear after a few months. And some for more colour variation. Oakley  The Replica Ear Sock The quality of the rubber ear socks is very similar with the original unit. Even the Oakley and Crosslink deboss and embo
18 comments
Read more

June 25, 2015
Willy's Rock Sunset It's been a while since my last weekend gateway. Can't really remember where I went neither.  Last April, I got a reminder from AirAsia for check-in, bought months ago during its sale season. Almost forgot that I did bought a return flying tickets to experience Boracay Island waters located in the Philippines. About Boracay Boracay Island and its beaches have received awards from numerous travel publications and agencies.The island comprises the barangays of Manoc-Manoc, Balabag, and Yapak in the municipality of Malay, in Aklan Province. Apart from its white sand beaches, Boracay is also famous for being one of the world's top destinations for relaxation. It is also emerging among the top destinations for tranquility and nightlife. How To Get There This is basically the How-To-Get-To-Boracay-Island 101 once you safely landed at Kalibo International Airport, Philippines with AirAsia. Travel time takes about 3:30 hours - 4
4 comments
Read more